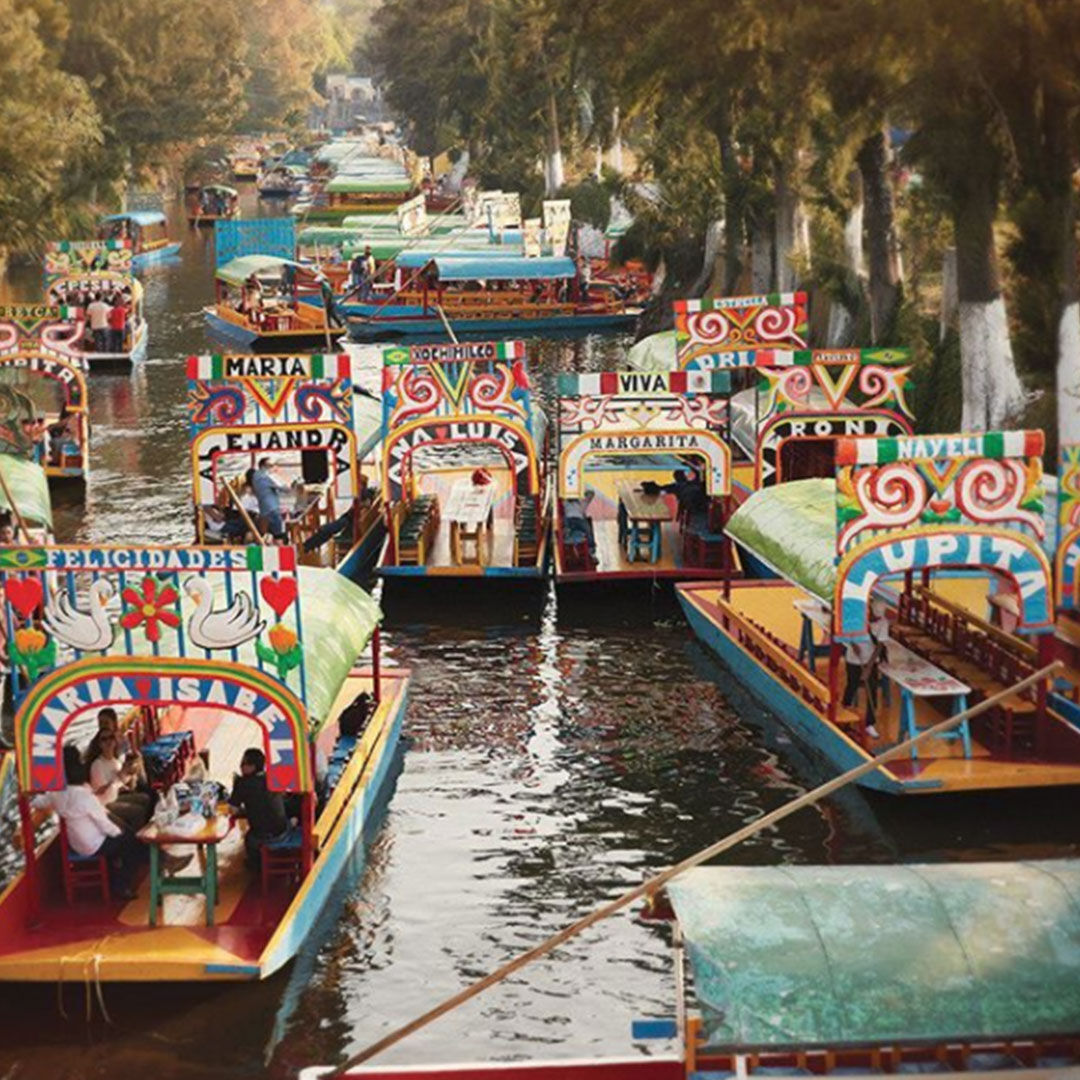 Up close and VERY PERSONAL with Frida Kahlo

What was Frida really like? To find out, I had an exclusive interview with the woman who was there when Frida’s bathroom filled with personal treasures was opened after more than 50 years: Hilda Trujillo, director of the Casa Azul in Mexico City.

“Opening the archives allowed us to discover the most important thing: the human being behind the famous artist.”

Hilda: Frida nowadays represents different social and personal concerns, such as the overcoming of disability through the transformation of pain into art, the contemporary liberal women and those who have social concerns to achieve a more equitable society. Also, Frida is an example of freedom and acceptance of sexual diversity.

I think the life and artwork of Frida Kahlo have become symbols of these causes, explaining much of her popularity.

When I started working at the museum, I thought that maybe it would be a routine, because a great deal about Frida Kahlo had already been written and researched. Nevertheless, once I had the privilege to work directly with her personal objects and her books, as well as Diego Rivera’s (her husband and intellectual companion) and some memorabilia regarding friends of them both, my opinion completely changed. Discovering what inspired Frida, together with what she liked and felt thrilled about, helped me understand the arts and the artists better.

Marlies: What prompted you to finally open the spaces and trunks in Casa Azul?

Hilda: This was actually not my personal decision. After the death of Mrs. Dolores Olmedo – friend and patron of Diego Rivera who was responsible for The Frida Kahlo and The Anahuacalli Museums and had opened their doors with her own resources – the Museums’ Technical Committee decided to open these spaces that were pending to be explored. I was commissioned this task and I assumed it as one of my main responsibilities.

Doña Dolores Olmedo was instructed by Diego Rivera not to open the bathroom at the Blue House for fifteen years, which Diego had chosen himself as a secured space to keep documents that he did not want to make public since he had ideological arguments with the Communists, the Trotskyists and other politicians. Nevertheless, Dolores Olmedo decided not to open that space as long as she was alive, as well as to keep closed other safeguarded places of the house, such as trunks, drawers, and closets.

Marlies: Can you describe what it was like to do this project?

Hilda: It was an arduous task, which got even more difficult by the lack of resources. Nonetheless, I received the support of the Museum Trust and of Mr. Carlos Garcia Ponce, president of the Technical Committee. Fortunately, the Alfredo Harp Foundation and Dr.
Isabel Grañen Porrua also supported this project with specialized personnel and economic resources to rescue the huge amounts of dresses, jewelry, toys, documents, books and photographs, etc. Most of these things were dusty, some artworks were even damaged. Luckily, none of them were irreversibly damaged because Coyoacan houses were constructed with vents that
helped to fight the high humidity, so typical for this area. In some cases, the dust had actually protected the treasures from insects!

Initially, we were not quite aware of what we were actually dealing with. Shortly after we started, we called experts from each area to guide and support us. Among them were the art specialist Ricardo Perez Camilla, Frida Kahlo’s scholar Teresa del Conde, Diego Rivera’s researcher Alicia Azuela, a photographer Pablo Ortiz Monasterio and the textile expert Marta Turok.

With their ample knowledge, these specialists made us realize the importance of our findings: they told us “here you have a Man Ray, a Nicolas Murray, a Manuel Alvarez Bravo”. They showed us which dresses and jewels had been made or altered by Frida.  In the case of some artworks that were not believed to be Frida’s – such as a composition inside a crystal sphere containing a horseman and a skull – we actually found materials that Frida used to make them, which proved her authorship. Also very interesting were the books marked with flowers, drawn or commented by her, in some cases even with poems.

These findings revealed Frida’s feminine personality and the importance that she gave to her personal ornamentation in order to built her own image. She made an artwork of her self-image through her particular way of dressing, while paying homage to the cultures of the different regions of Mexico.

Marlies: What, to you, were the most surprising finds?

Hilda: There is so much!

–  One of the hand-shaped earrings that Picasso gave to Frida as a present.

–  The portrait-drawing that Modigliani did of Diego Rivera.

–  Einstein’s letter congratulating Diego Rivera on the mural painted at the Rockefeller Center.

–  Frida’s personal letters to her women and men lovers.

–  Frida’s interest in photography; how Frida decorated her photos, kissed them, clipped them, etc.

I would like to emphasize that this archive revealed the national and international context in which Diego Rivera and Frida Kahlo developed as artists, allowing us to understand the artistic creation of these individuals.

Marlies: I feel that you know Frida quite ‘intimately’; could you share some things that not a lot of people know about her?

Hilda: Her intellectual restlessness, her taste for poetry, her interest in science and in different disciplines of knowledge. Her love for life, which allowed her to live it fully with the help of her artistic creation. Like I said before: opening the archives allowed us to discover the most important thing: the human being behind the famous artist who clung to life and hedonism to reverse the symptoms of diseases that otherwise could have left her hopeless and prostrated in bed. This idea of Frida was not previously conceived, and it is precisely what we try to convey at The Frida Kahlo Museum: Frida’s creative process as a reflection of her love of life, happiness and artistic creation.

Marlies: With about 25,000 visitors monthly, Casa Azul is one of Mexico’s most-visited museums. Congratulations! What is the secret of your success?

Hilda: When visiting a house museum, most visitors want to know the artist’s intimate world. In particular, when visiting the Blue House, people want to see what inspired Frida Kahlo and feel the ambience of where she lived. With the old photographs of the archive, we have managed to transmit this to our audiences in the recent years. Additionally, we have increased the contents of the exhibited information and implemented techniques to improve the visitors’ comfort. In the last twelve years, the amount of visitors has grown exponentially, from 120.000 per year in 2013, to more than 500.000 a year on the present time. In general, visitors leave the Blue House gratified and happy to have been here.

Marlies: Why do you think people relate so strongly with Frida?

Hilda: As well as being an original artist who openly represents her feelings, her life and emotions in her artworks, Frida Kahlo went beyond. Imagine in the 1930’s a woman featuring her own abortion in her art! She was a strong artist, developing her career in a country that was still fairly conservative and Catholic. Frida dared to be herself, to be free without caring for the canons and social standards of her time.

‘’I hope Frida Kahlo can be an inspiring character for women, a symbol of freedom, creation, solid personality and tenacity.’’

Marlies: What would you want to say to Frida if -by magic- you could meet her in real life?

Hilda: I do not know… because I admire and respect her so much, I would not know what to say to her.

Marlies: The theme behind my work and this magazine is ‘Feminine Feminism’. Do you think Frida could have related to that term? Do you consider her a feminist?

Hilda: In Frida’s time the feminist concept had a different connotation. She loved her husband, who in turn let her be herself. They encouraged each other in the art creation and helped one another in life. Despite his strong personality and innate machismo (characteristic of the period in which he lived), Diego Rivera allowed Frida to be free, even impelling her to be so. For this reason, I do not think Frida was a feminist, at least not in terms of the most radical feminism.

Personally, I believe that men and women should have the same rights, opportunities and respect for each other under all circumstances.

I would like to express my concern at the high level of violence against women that still exists at a global level. In Mexico, this is a big problem. Brutal killings took place in the City of Juarez and have started happening in other parts of the country now, which is highly worrisome. I hope Frida Kahlo can be an inspiring character for women, a symbol of freedom, creation, solid personality and tenacity.