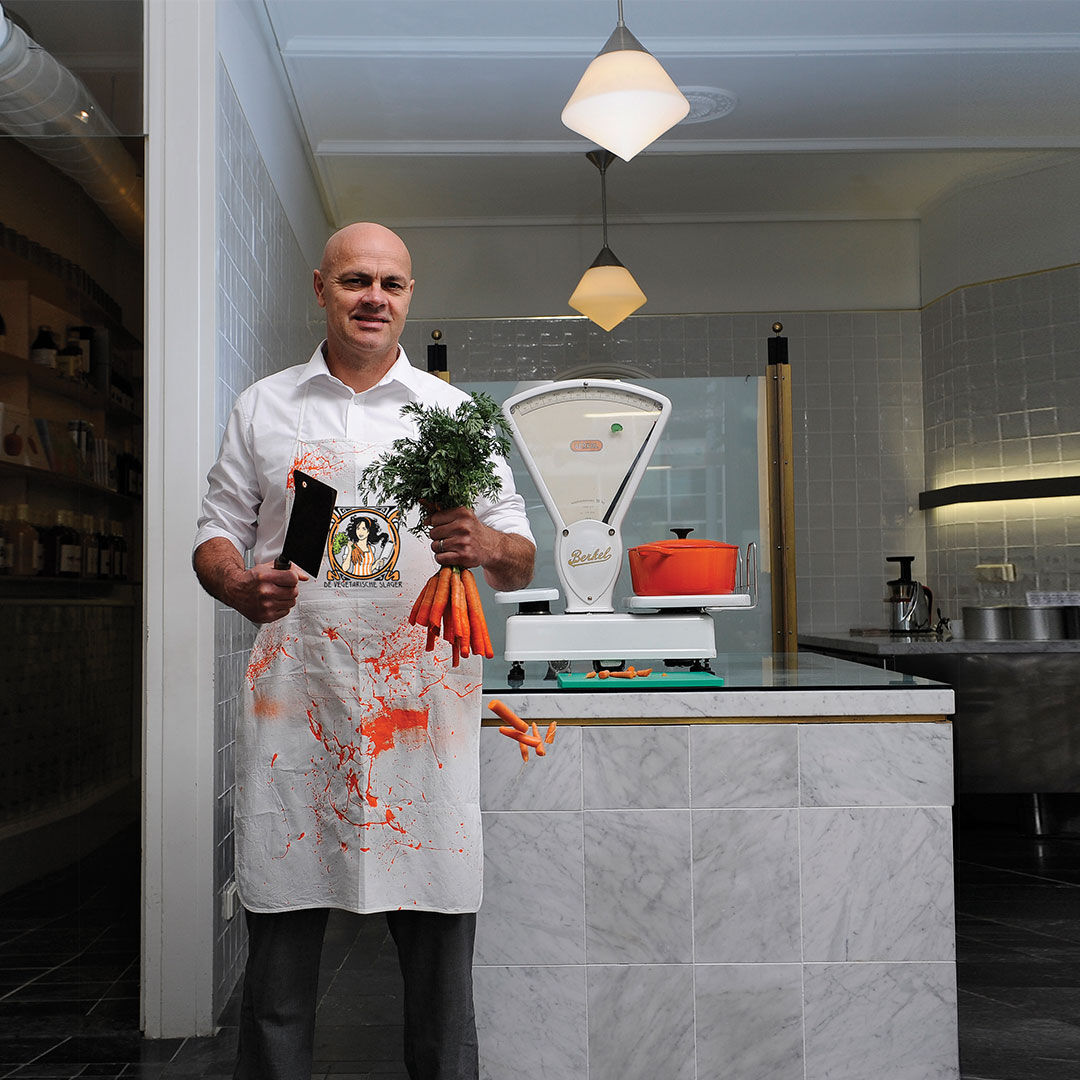 Jaap Korteweg is a 9th generation farmer who loves the taste of meat. He is also the world’s first vegetarian butcher. With his amazing ‘I-cannot-believe-it’s-not-meat’ products, Jaap manages to convert even the biggest steak lovers. “Let’s take the animal out of the food chain.”

Marlies: You grew up on a farm, surrounded by cows, and now, as a pioneer of plant-based astronomy, you are at the forefront of the vegan revolution. Let’s start at the beginning: how did you become a vegetarian?
Jaap: During the big outbreak of swine flu and mad cow disease, 20 years ago, I was asked by the government to store tens of thousands of pig carcasses in the cooling units I normally use for carrots and potatoes. I said no, but what I witnessed at other farms changed me forever: rotting cadavers, blood covering the yards. So many unnecessary deaths. When a plot of land became available, I decided to keep cattle there, in an organic and animal-friendly way: a few calves, some pigs. I was going to treat them well, give them time to grow and kill them myself after about 5 years, which is considered an incredibly long time in that industry. But I quickly realized that after bonding with these animals, it would feel like killing members of my family. That’s the moment that I became a vegetarian.

Marlies: Did you miss eating meat?
Jaap: I did; I missed the taste, the bite and texture of it. The taste is really the only argument for eating meat. It is not healthy for us; it is not kind to animals and it is definitely not sustainable. To produce meat with the same nutritional value as plant-based food products, you need 3 times as much land, energy and water. As a farmer growing grains and beans, I was very aware of the fact that we basically use animals as a ‘machine’ to convert these grains and beans into good-tasting food. And I started to think outside the box: with all the knowledge and technology we have, can we not replace animals with an actual machine in this process? Take the animal out of the food chain altogether? That idea really triggered me.

Marlies: It makes perfect sense!
Jaap: It does, but it took people a while to get used to the idea. So, it was my goal to convince people with an amazing product: a plant-based meat substitute that captures the flavor of beef, pork and chicken and that is of the same, if not better, quality as the original. To achieve that, I worked with scientists, but also with great culinary minds. We took our time and really focused on quality, not cost. People would say to me: ‘There is no market for what you do; vegetarians don’t want to eat anything that resembles meat.’ But how about all those people that don’t become vegetarians because they love the taste of meat so much? Plus, if you think about it, most of the meat products we eat, such as hot dogs or chicken nuggets, don’t grow on an animal; they have been developed by people. And that is pretty much what we do, except we use plant-based protein. When Holland’s best butcher became our first big client, we knew we were on the right path.

Marlies: I think it’s so interesting how eating meat grew from a luxury into something people felt entitled to do in large quantities: ‘I have the right to eat 250 grams of meat a day!’.
Jaap: It’s true, we have become addicted. I think even I was addicted. But if you swap real meat for fake meat, you can still have your 250 grams a day. You can have 500 grams if you like! There really is no limit. I believe that that is one of the reasons we are so successful. We don’t fight the addiction itself; we offer a healthy, sustainable, cruelty-free alternative. Compare it to driving an electric car instead of a gasoline-powered car; you’re still driving a car, but you are using a ‘green’ energy source.

Marlies: A world where we don’t eat any animals at all, is that your ultimate goal? And what will such a world look like?
Jaap: It is. Imagine giving back to nature all the trees we have chopped down for raising cattle and all the land we have taken. Imagine all the space it will create, and how it will allow animals to live in their natural habitat again. It will be a beautiful world.

Marlies: Do you believe that this can ever become a reality?
Jaap: I believe that we will be able to replace 80% of the total meat consumption. And the people who have experienced the times we live in now -the pollution, the health problems, the cruelty against animals- will look back and say: wow, we really have come a long way.
Marlies: A beautiful and inspiring vision, Jaap. Thank you!

“This is more tender than pork and juicier than chicken!”, Ferran Adrià (El Bulli, Barcelona) raved about the Vegetarian Butcher’s ‘meat’ products in 2011. Since then, other companies have tried to create plant-based meat substitutes that can wow the greatest culinary minds in the world. The latest meat-free hit is the ‘Impossible Burger’, developed by Impossible Foods, a company that has attracted over $300 million in funding. It has been hyped so much that I almost felt nervous ordering it during my last visit to LA! But there it was on my plate, looking and smelling exactly like the real deal. It even bleeds when you cut into it! The outside of the burger is coated in coconut oil, so it sizzles when you fry it and has that familiar crunchy savory outside. And the taste, oh the taste! Not just like meat, but like the most expensive, most exquisite meat you’ve ever tasted. My verdict: impossibly good.

Watch the video of the interview here.