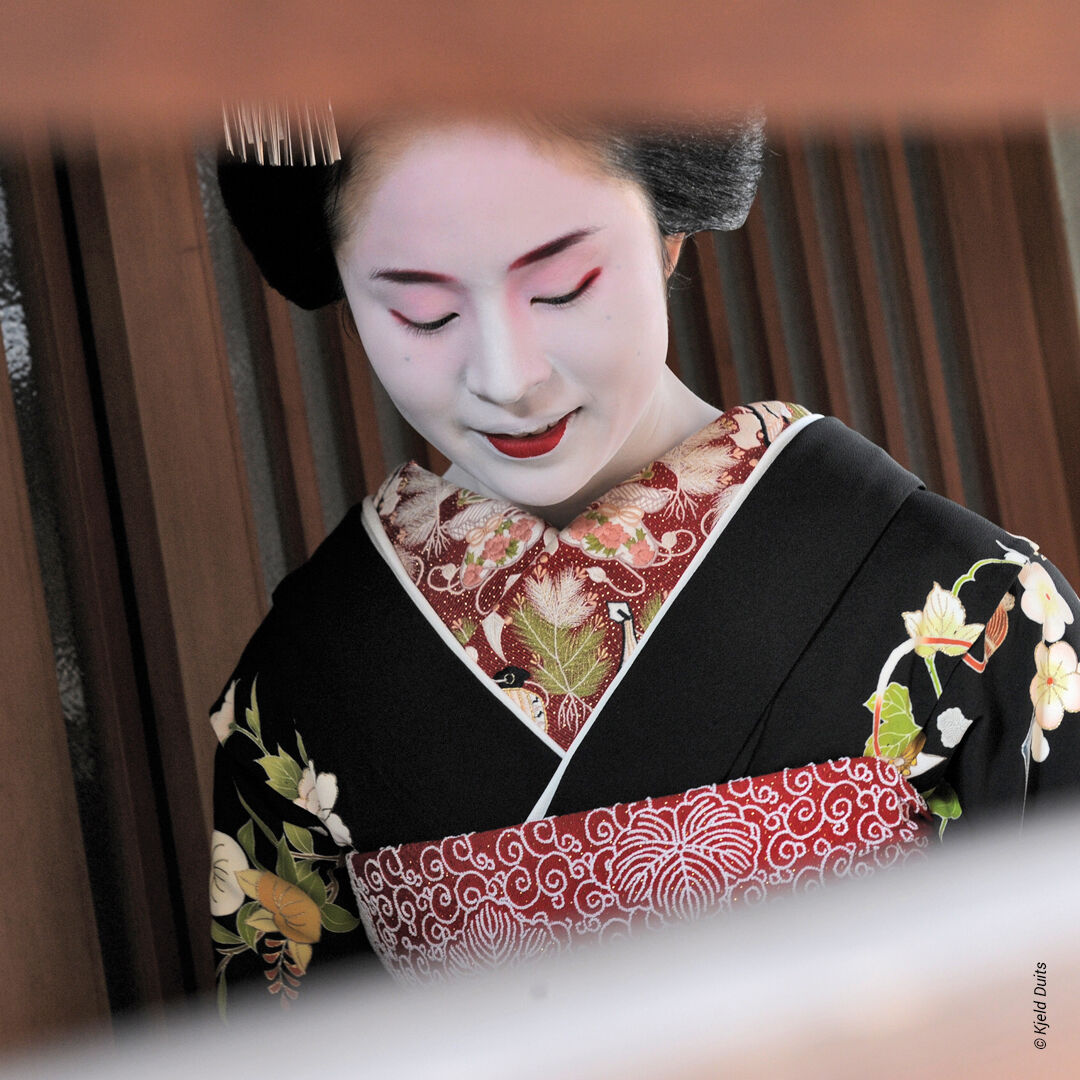 Geisha are surrounded by mystery. Even in Japan where this tradition was born. The parents of the young girls who choose this path, are often taken aback and shocked by their daughter’s choice.

Fumiyoshi is a Maiko (geisha in training) in Kyoto’s Miyagawa Geisha district. She first fell in love with the world of Geisha when she visited Kyoto with her parents. The former capital of Japan has five Geisha districts and is the only Japanese city where Maiko and Geisha still play an important role. “I visited Kyoto again on a school trip and had a chance to meet a Geiko,” she says using the Kyoto term for Geisha. “Her elegance, the way she behaved. I felt really attracted to that. I wanted to become like her.”

Her mother was initially strongly opposed. “It is a world that I didn’t know at all, a hidden world,” she recalls. She had a distorted view. “I had heard about mizuage,” she says, referring to the deﬂowering of Maiko by a customer who pays money for the privilege.
“That doesn’t happen, that doesn’t happen,” reacts the shocked Geisha Fuminari who is sitting nearby and overhears the conversation. She feverishly waves her right hand in front of her face to reinforce her words. But even in Japan, there are still countless people who believe that Geisha are glorified prostitutes. Fumiyoshi’s mother now knows better, but the myth is diffcult to eradicate.

“In modern Japan, Geisha and Maiko have two functions,” explains Kumiko Nishio, a professor at Kyoto Women’s University who studies the role of Geisha in Japanese society. “They are a symbol of Japanese culture, and they are a kind of hostess at official dinners and geisha parties.”
“While customers eat, Geisha and Maiko serve drinks and talk with them,” says Yoshimi Kosaka, a former Maiko, now in training to take over Geisha house Yoshifumi, where Fumiyoshi works. “They also perform traditional dances, sing with their customers, play special games, and play the shamisen (a traditional Japanese stringed instrument),” she explains. These skills have been transferred from generation to generation of Geisha and Maiko over many centuries.

This age old traditional culture, and the Geisha’s hermetically closed world, tends to initially put off many Japanese. “At first I thought I would not enjoy myself, that I’d be tense, that it is a difficult world to enter,” says Kenji Yamada who works in the legal sector. He is a regular client of Yoshifumi. “But over the years, I recognized that it is a very relaxed and fun world.”
He attends Geisha parties for two reasons, he says. “One is to get to know your business relations by eating and spending time together. The other is that after you have become friends, to not only meet for business, but for friendship.”

Although often seen as entertainment for men, Geisha parties are actually not limited to male clients. There are many female guests, and even couples attend. “For a woman there are lots of things to learn from Geisha,” says Sakurako Naito, a business woman from Tokyo who regularly visits Yoshifumi. “You can experience incredibly refined, artistic performances by dignified, beautiful women,” she explains.
Becoming a Maiko or Geisha seems an unlikely choice for a modern girl. But Fumiyoshi is not the only one who sees her future in this occupation from the past. “Forty years ago, there were only about twenty Maiko left in Kyoto,” says Professor Nishio. “But in the past ten years they have increased to between sixty and eighty.”

The resurgent popularity is due to an explosive increase in tourism, and a new image. “On TV, in movies, and even in novels and manga (Japanese comics), actual Geiko and Maiko have been given exposure as working women,” she explains. “They are like idols.”
Women dominate the world of geisha, men only play a role as client or supplier. “That’s why it’s an easy work place for women,” says Nishio. “It’s a place of female entrepreneurs.”

It is a world that is very diffcult to enter, though. There are few places available, and the training is notoriously tough. A girl who wants to become a Maiko needs to apprentice with a Geisha house for ten months. During this time she is both maid and student, with classes for singing, dancing, and a whole range of traditional instruments. The crammed schedule leaves little time for yourself, or even sleep. Having a date or meeting a friend is out of the question. “Fifty percent of the girls give up before ever becoming a Maiko” explains the owner of Fumiyoshi’s Geisha house. So, training girls to become a Maiko is a huge investment. A Geisha house owner must feel that a girl can handle the challenge, and carries promise. Even then, it still often doesn’t work out.

For the girls who do succeed, the experience is life-changing. “It has changed my way of thinking,” says Fumiyoshi, “I now pay attention to the needs of others, and have become attentive. My life has completely changed.”
“As a Maiko, you get to stand on a huge stage,” says owner-in-training Yoshimi.” You meet lots of different people and you have experiences that you could never have as a student. When I was a Maiko, my world expanded enormously.”

Kjeld Duits has lived in Japan since 1982 and works as a Japan Correspondent for major news organizations.