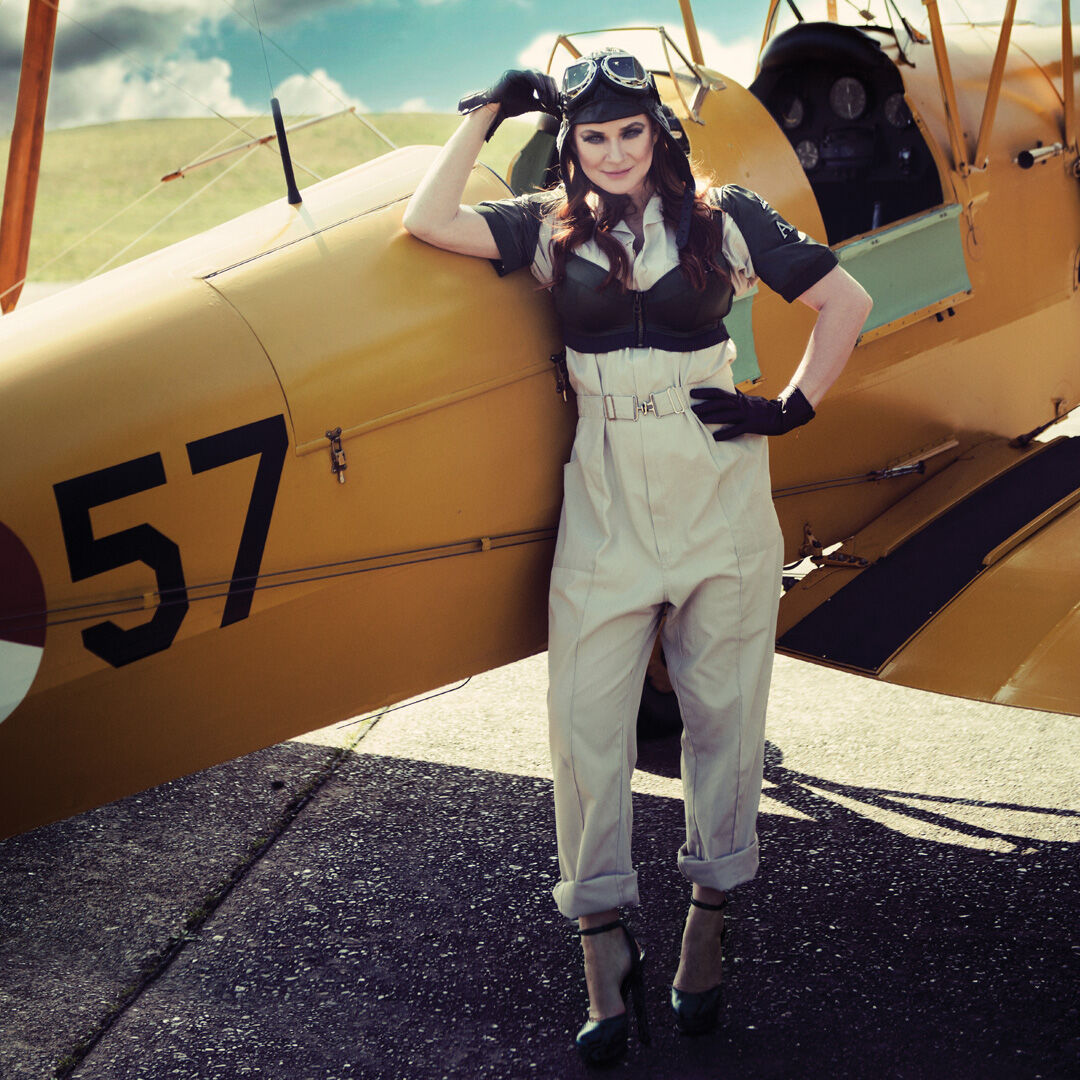 The bright blue skies above Santa Paula Airport, 60 miles northwest of Los Angeles, were vibrating with the sounds of airplanes looping, rolling, and spinning through the California sunshine. “So fierce, I love it!”, photographer Ellen von Unwerth declared with a big smile as our models, embodying Amelia Earhart’s fearless spirit in my ‘Aviator’ couture collection, posed away for by the wings of a shiny red plane. All of a sudden, a majestic aircraft appeared in the shimmering heat above the tarmac. As it headed straight towards us with roaring engines, my heart skipped a beat.

In one instant, I felt the thrill and awe that my muse for this season, Amelia Earhart, experienced the moment she fell in love with aviation. In her diary, the legendary aviator described being at a fair with a girlfriend when a bored stunt pilot began diving at the crowd, just for kicks. “I remember the mingled fear and pleasure which surged over me,” Amelia wrote. “I believe that little red plane said something to me as it swished by.” Her friend ran off, Amelia stood there, mesmerized, changed forever.

Amelia broke records and rules, paving the way for generations of adventurous women, both in the sky and in society. “Some of us have great runways already built for us,” she once said. “If you don’t have one, it is your responsibility to grab a shovel and build one for yourself and for those who follow after you.” Words that could have been spoken by Miki Agrawal, the trailblazing business phenomenon I interviewed for the latest issue of my Feminine Feminist glossy. From period panties to an affordable, portable bidet; Miki’s products streamline people’s lives while breaking taboos.

Speaking of breaking taboos, I also talked with Dutch bestselling author (and dear friend) Heleen van Royen who is not afraid to risk it all with her groundbreaking work, whether it’s a selfie show or a sex diary. And what is a bigger taboo than sex? That’s right, money! I asked financial wizard Annemarie van Gaal why so many women are still scared of (financial) success and how we can make our money dreams come true.

Everything starts with a dream. What sets apart Amelia Earhart and the innovators in this issue is that they dared to dream bigger and bolder. And at one point, they were all called crazy. When Amelia Earhart decided to be the first woman to fly solo across the Atlantic Ocean, they called her crazy. She shrugged them off and did it anyway. Scientist Pierre Capel also knows a thing or two about being called crazy: by linking the magical world of emotions with hard science, he gives us scientific evidence of the power of our feelings, a courageous act in a culture obsessed with ‘rational thinking’.

As we fly into the future of feminism, Amelia’s message is more relevant than ever: “Women, like men, should try to do the impossible.” Standing on the tarmac in Santa Paula that morning with the plane swishing right over my head, I heard the same message Amelia must have heard nearly a century ago. “Dare to dream crazy,” the plane said to me. I looked up at the sky and smiled. “I would be crazy NOT to,” I answered.