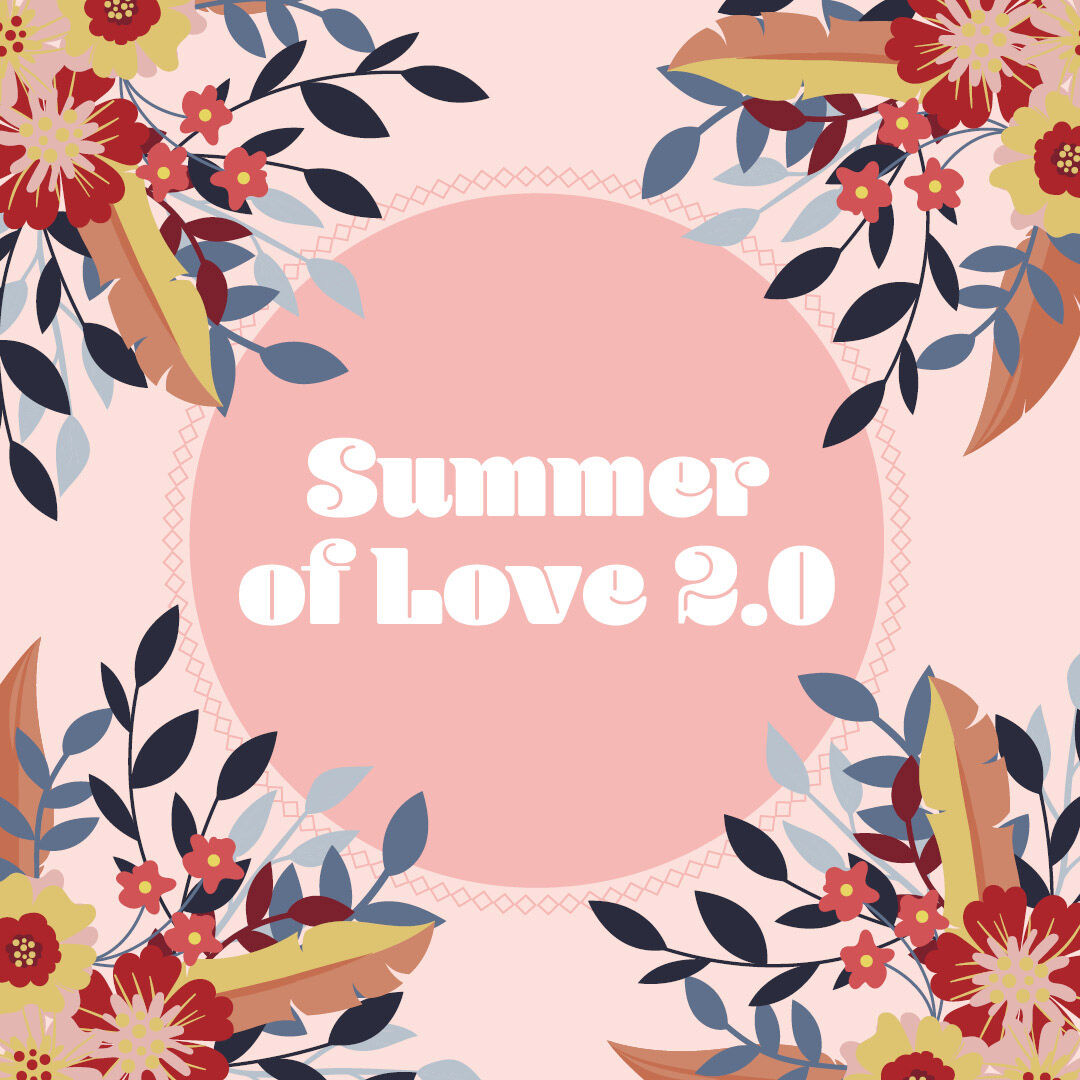 The Summer of Love may be more than half a century behind us, but hippie culture with its ‘multi-culti’ influences is hipper than ever. Going deeper than just using a retro filter, our Instagram generation is embracing hippie values such as wanderlust, free love and clean eating. And guess what? It may be exactly what the world needs now. Excuse us while we kiss the sky!

Let’s play a game. Do you have any of the following in your fridge: hummus, tofu, kombucha? Do you use a meditation app? Do you call people or things your ‘spirit animal‘? Has your boyfriend ever had a ‘man bun‘? Do you know what a ‘downward dog‘ is? Do you blame Mercury Retrograde when stuff goes wrong? If you answered ‘yes’ 4 out of 6 times, you are much more of a hippie than you may think (6 out of 6, and you’re an official neo-hippie). Yes, even your ‘wanderlust‘ is the ideological offspring of the revolutionary 1960s counterculture that embraced free love, sustainable living, tolerance and tons of tie-dye. Traveling the so-called ‘hippie trail‘ to countries like Egypt, Morocco, Afghanistan, India and Japan, the flowerchildren brought back a multi-cultural mix of values and habits that still influence us today, from yoga to yage. Yes, you can make fun of the peace sign-throwing hippie, just as you may laugh at our current obsession with naked yoga and Burning Man. But the core values of hippie culture – an open mind and an open heart – will never go out of fashion. Namasté, bitches!

Here are 5 ‘groovy‘ hippie habits that we ‘totally dig‘, then and now:

Then: From vibrant Egyptian fishing villages to Istanbul’s bustling bazaars: the Middle East was a hippie hotspot. Rejecting the canned-food culture of the 1950s, backpackers went crazy over dreamy local delights such as spicy lentil soup, hummus (a thick chickpea spread) and tahini (a creamy sesame seed paste). Filling and vegan, like the tofu discovered by hippies exploring Asia, this food was good for your belly, your soul and the environment!

Now: Kombucha and kimchi may have replaced granola and brown rice as food fads, but more than ever, we are embracing eating as a political act, from veganism to farm-to-table dining. Our obsession with hummus, meanwhile, has gone completely out of control. (3 words: hummus ice cream).

Then: While the Beatles were in Rishikesh, India, throwing themselves at the feet of Maharishi Mahesh Yogi – aka ‘the groovy guru’ who invented Transcendental Meditation – hippies were meditating with monks in temples and caves all over Asia, hoping for a spiritual awakening, or at least a drugless high. Meditation became the magic word: reaching Nirvana by sitting still and focusing on your breath. For many, many hours.

Now: No time to sit in a cave in Nepal? Download a mindfulness app! Also trending: a combination of meditation and high intensity interval training. Meditation is hot, especially after science proved what Buddhists have known for 2600 years: it reduces anxiety and slows the ageing process. Forget gurus, it’s doctor’s orders now!

Then: After writing about his hallucinogenic, peyote-fueled adventures with an old Yaqui Indian sorcerer, Carlos Castaneda became one of the most famous spiritual celebrities of the 1960s. A generation of hipsters longing to expand their minds started embracing ancient South American rituals involving psychoactive drugs like peyote mushroom and yage (aka ayahuasca) as a way to expand their minds. Their motto: ‘turn on, tune in, drop out!’.

Now: Not so crazy about the ‘dropping out’ bit, burned-out millennials are nonetheless returning to hallucinogenic medicine as a ‘catalyst for inner growth’ (read: a way to explode their ego). The process – puking, tripping, feeling reborn – hasn’t changed, but we no longer have travel to the Peruvian Amazon for a therapeutic ayahuasca ceremony. And thanks to the hippies’ brave explorations, we know how to free our mind without frying it. Far out!

Then: Hippies returned from their pilgrimages to India with the perfect shortcut to self-transformation: yoga. A physical, but mostly spiritual discipline, the ancient practice of yoga was embraced as ‘meditation in action’. Yoga schools started popping up, but we were still decades away from ‘hot yoga bodies’ and butt-lifting yoga pants.

Now: Wanna get your yoga on? You can, 24/7, any way you want: naked, on your paddleboard or with your dog: Doga. (We like to imagine a combination of the three). Or how about black-light yoga with a nightclub vibe, core-power yoga with dumbbells and Acro Yoga, a combination of yoga, circus arts and cheerleading? Yoga purists may roll their eyes at at the billion-dollar business it’s become, but we applaud this global wellness obsession!

Then: Forget nuclear families, why not create your own tribe? Traveling hippies in awe of indigenous tribes and their oneness with nature started creating their own communities: brothers and sisters leaving the rat race and ‘getting themselves back to the garden’ (if you know which song* that’s from, you score 10 hippie bonus points!). Sharing their stuff, space and sexual partners, the tribal hippies had the catchiest motto: your vibe attracts your tribe.

Now: With the emphasis more on self-caring and less on sharing, thousands of dust-covered ‘tribal tourists’ dance in the desert once a year at neo-hippie festival Burning Man. At the same time, pictures of Demi Moore quarantining with her ex Bruce Willis, their daughters and their partners – all in matching green-striped pajamas! – proved: modern tribes transcend blood ties and social conventions.

The marlies|dekkers brand offers a wide variety of lingerie that can be worn by anyone and caters to every woman’s individual needs. Within our Maison Marlies blog you can read all about the life behind and surrounding the company. Whether you are eager to know where Marlies gets her inspiration for designing new lingerie collections, her lifestyle, healthy cooking ideas, or simply to share her taste in amazing art - you will find it in the blog. Our fearless creative director manages to find time to write about her business trips and even her shopping sprees and vacations for the times she can let her hair down for a while. And even while she is on holiday she will not leave you hanging.

When you are feeling lost in finding the right fit or determine your bra size, Maison Marlies offers a set of guidelines so that you can continue shaking your bon bons without them falling out. You'll get style tips on how to wear and style your bras, and bikinis. You would not want a wardrobe malfunction which can actually be prevented when you are wearing high quality luxury lingerie. And when your breasts are kept in place in marlies|dekkers bras or bikinis, you can fully celebrate your femininity in all its glory and full potential. The blog offers advise on how to mix and match womens lingerie to boost, inspire your own fashion sense and keeps you updated on the latest fashion trends.

Her celebrity friends are also very pleased with that perfect fit a marlies|dekkers bra can offer you. These women proudly show off their marlies|dekkers lingerie sets in photoshoots for magazines, on stage when they're performing, during a cameo on tv or on the big screen in movies. Maison Marlies dedicates a special section of the blog to all gender equality related news so you are always updated about the latest developments around this special mission that embodies Marlies’ vision for the future.

SUBSCRIBE TO NEWSLETTER
get access to exclusive vip sales, lingerie inspiration and special events with our newsletter subscription