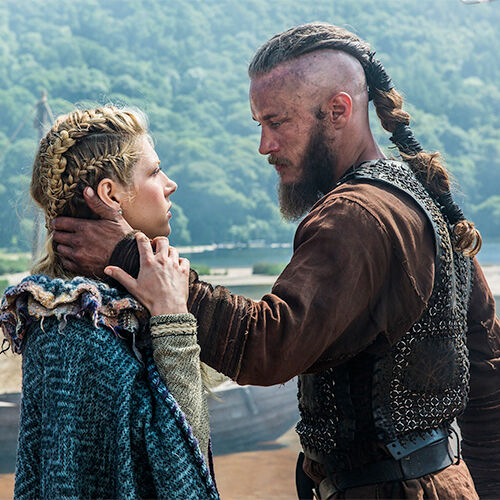 According to the Viking sagas, this kick-ass lady was a mother, a farmer, a shield maiden (don’t you love that word?) and an earl. She was devoted to her family, but she was no softie. When her husband Ragnar had a child with another woman, she dumped him. When her second husband humiliated her in public, she stabbed him in the eye.

I fell in love with Lagertha as soon as I saw her in History Channel’s epic Vikings. It definitely helped that she was played by martial artist stunner Katheryn Winnick, and that her style was stunning: braids and daggers, billowing capes and ridingboots. As a matter of fact, I took up boxing and started braiding my hair not long after the first episode!

Most importantly, I really related to the kind of battles Lagertha fought, even though they took place over a thousand years ago. Lagertha was trying to stand her ground in love, marriage, and politics, without losing her feminity. Sounds familiar?

In one of my favorite scenes, Lagertha gets into an epic fight with her lover to settle an argument. Swords, blood and all. Nobody wins, but afterwards they make passionate love. (her husband, played by fomer Calvin Klein underwear model Travis Fimmel, is another reason to watch the show!) An equal, sexy partnership.

Yes, the Vikings’ ways were violent and cruel, -I would get arrested if I attacked my lover with an axe!- but I think modern day women now can learn so much from Lagertha’s kick-ass attitude. That’s why I devoted this couture collection to Lagertha; to her feminity, her fighting spirit and fierce intelligence. And yes, to those killer braids.