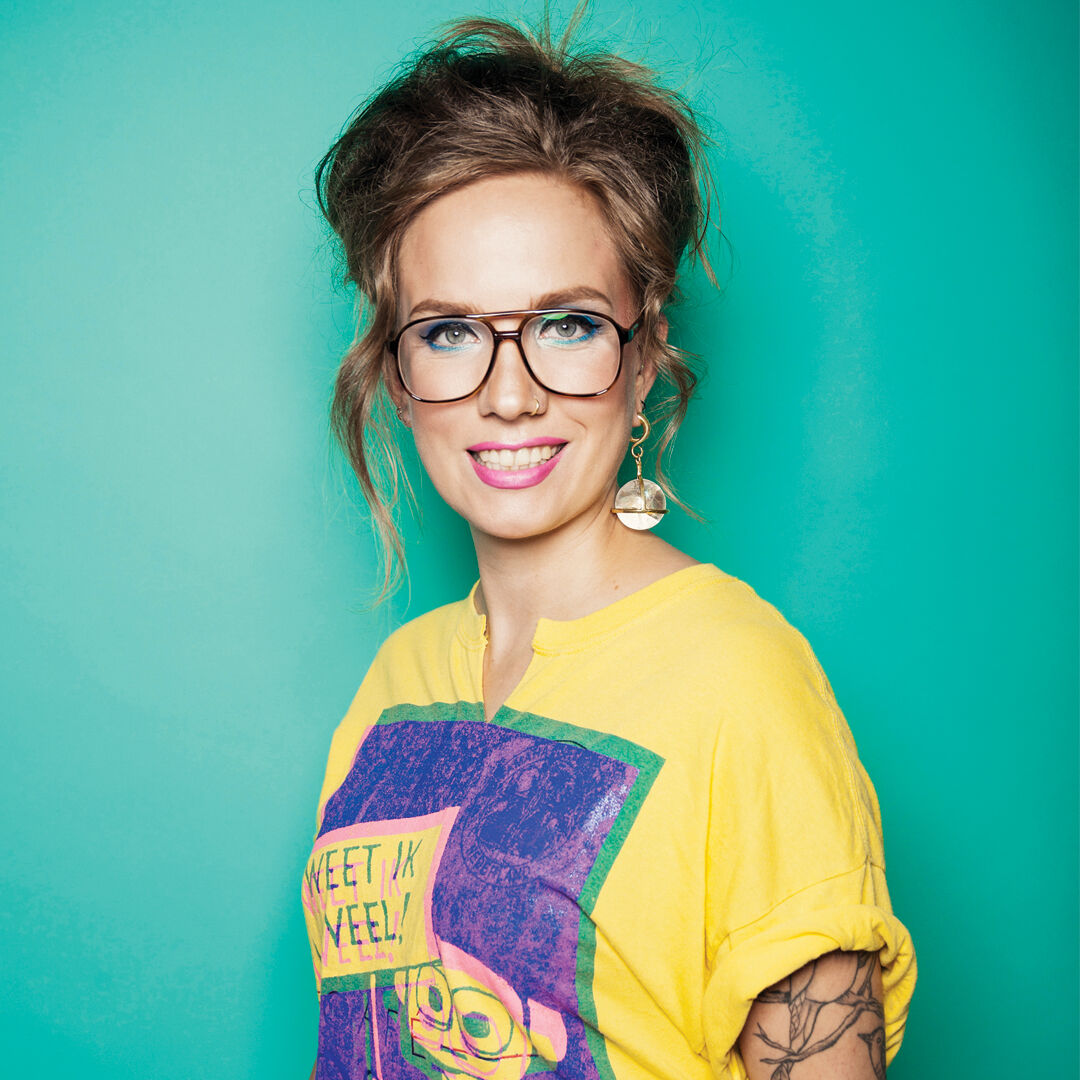 After #MeToo, it’s crystal clear: the latest feminist wave is fueled by social media. So, to celebrate this Women’s Day, I sat down with Aafke Romeijn, who is not only a hugely talented musician, writer and journalist, but who, to me at least, is Holland’s undisputed Queen of Social Media. “On the one hand you have a bigger platform than ever as a woman and a minority, on the other hand, you get more shit thrown at you than ever.”

Marlies: Aafke, we never met until today, but I have already grown to love you through your social media presence. The way you express such important feminist issues in such short, powerful statements moves me to the core! For over 25 years now, I have been active in feminism myself, empowering women by making them feel beautiful and confident, but what you do is really special. What motivates your posts and tweets?
Aafke: Wow, thank you! It often starts with a feeling of amazement and rage over an issue that reeks of injustice or inequality. I may read something in the paper about international politics or the educational system, for example, that just doesn’t seem right or fair.

Marlies: I love how you are not afraid to use the word ‘rage’. There is still this bias that when women express anger, they are ‘hysterical’, whereas men merely have ‘strong opinions’.
Aafke: Totally! To me, anger can be a very constructive emotion. As long as you channel it into a constructive argumentation. Before I tweet something, I research all the different sides of a story. When someone is accused in a #MeToo tweet, for example, I don’t get involved until I have looked up all the sources and have found out if the accused person has reacted yet. Then, I express my anger in a short, to the point yet thorough text. It only works if you combine all those elements.

Marlies: When you sink your teeth into an issue, you are very fierce: you don’t let go.
Aafke: I don’t. But there are many other sides to me, and I try to show that whole spectrum in my online presence. I don’t walk around pissed off all day; I also love to give humorous TV commentary, complain about a flat tire or mention something adorable my child has done. In a way, I have turned myself into a brand, and people are ‘buying it’ because they see it’s authentic.

Marlies: You don’t have millions of followers, but when you enter the public debate, your voice is heard. Can you give me an example?
Aafke: Last year, I addressed an issue that had been bothering me for a while: the way the Dutch Chamber of Commerce forces you to submit your registered address which, in the case of freelancers for example, is often a home address. They then make that address public, which is a huge breach of privacy; there have been many cases where women were harassed at their homes by their exes or fans, for example. I became so fed up that I dedicated a thread of tweets to it. Soon after that, public radio called me and the whole thing started to snowball.

Marlies: For 25 years, the Chamber of Commerce has been a thorn in my side. At some point however, I decided I would never be able to win from such a powerful institution. But there you were, compressing and expressing all my anger into 3 angry tweets! For the longest time, women have been ignored as opinion makers in the public debate. Looking at your success, however, I’m thinking: perhaps we have been too afraid to piss people off?
Aafke: You make a good point, but let’s not forget that it takes a lot of guts for women to put themselves out there. After my first prime-time TV appearance, to find out if my story was having a positive impact, I first had to scroll through a huge amount of crap that people had posted about me: that I was stupid, that my glasses sucked; basically all the things people usually think about you but won’t tell you in your face. It’s very double-sided: on the one hand you have a bigger platform than ever as a woman and a minority, on the other hand, you get more shit thrown at you than ever. People often say: ‘You’re so brave, Aafke, the way you just do your thing!”. Well, believe me, there are enough times that I sit at home, crying on the sofa.

Marlies: For centuries, exploiting our beauty has been one of the few socially accepted ways that women could matter and make money. From artist’s muses to top models to the Instagram stars of today, who get sponsored for their beauty and glamorous lifestyle. But you, by showing yourself in all your anger, are breaking away from that and creating your own business model.
Aafke: (laughing) Not a very clever business model perhaps! But seriously, through my online presence, I actually do get a lot of lucrative offers, like my recent book deal. I think there have been angry, intellectual women in the past who were taken seriously, but only when they could be considered ‘one of the boys’ by neglecting their femininity. Whereas I am very comfortable in my womanhood.

“I believe, that as a woman, you should be able to celebrate your femininity in a way that makes you feel good and be taken seriously for it.”
— Aafke Romeijn

Marlies: You celebrate it!
Aafke: I believe that as a woman, you should be able to celebrate your femininity in a way that makes you feel good -be it with make up and nude selfies or in a less flashy way- and be taken seriously for it. After all, an awareness of your body is paramount for your intellectual development. My body is constantly changing, through motherhood, through aging, and the way I experience and view those changes really shapes me as a feminist. For too long, women have been appreciated either for their brains or their bodies. Well, I claim the right and space to celebrate both my intellect and my femininity! Even though it can be pretty scary sometimes…

Marlies: Please keep doing it, Aafke! So that future generations of women can live in a world where women are free to be themselves, in all their beautiful complexity.

Watch the video of the interview here.