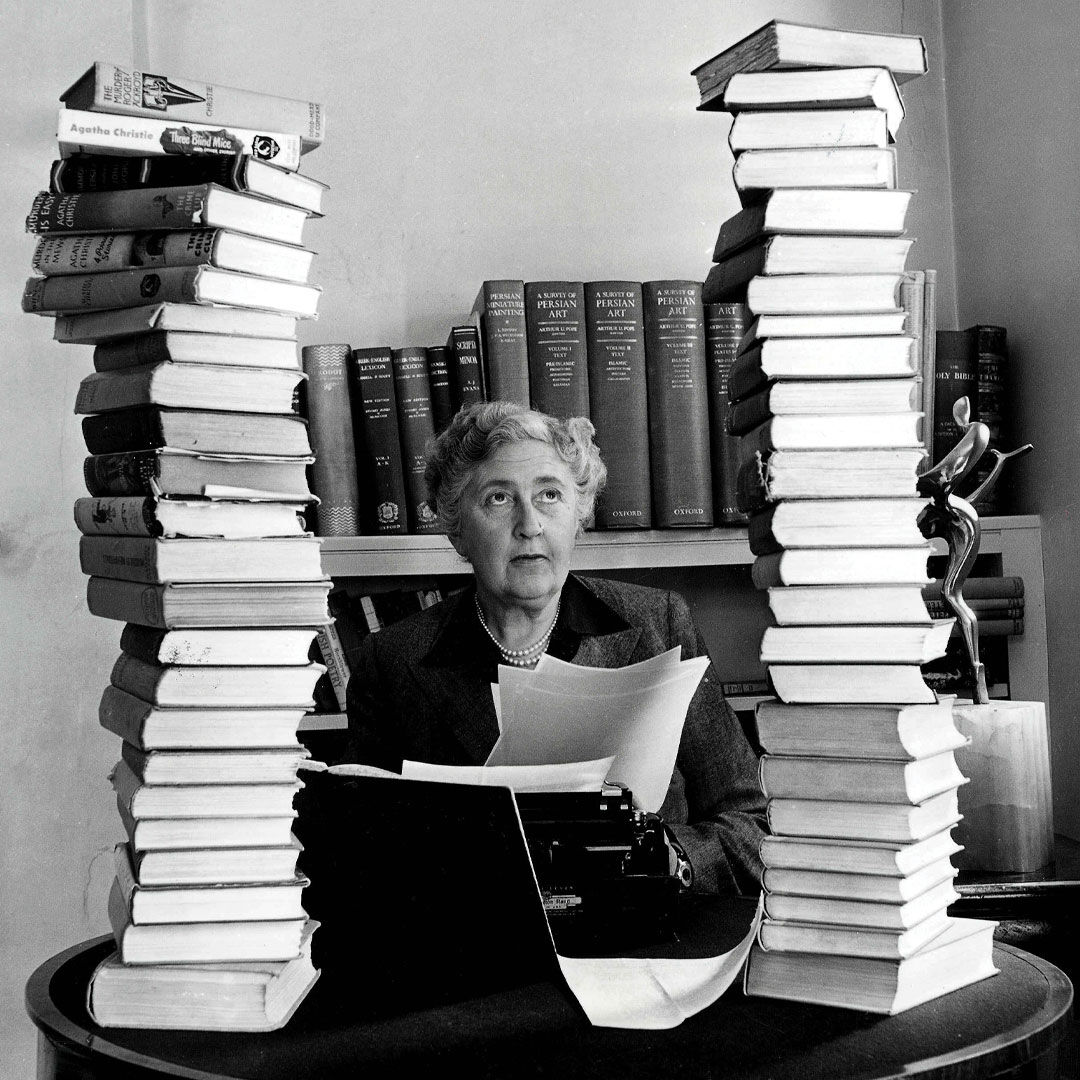 Imagine Agatha Christie, and you probably see her most famous female detective, Miss Marple: a neat old lady, snowy white hair, tweeds and pearls. Don’t be fooled! The woman who sold 2 billion copies of her books in 104 languages – outselling even the bible and William Shakespeare- lead a life filled with passion, fast-paced adventures and the wildest plot twists. “I had the firm conviction that, if I went about looking for adventure, adventure would meet me halfway.”

Agatha Mary Clarissa Christie was born in 1890 in Torquay, a seaside resort in Devon. After an idyllic, yet eccentric childhood – she never went to school, and taught herself how to read and write – the shy, but strong-willed Victorian beauty with the waist-long blonde hair was thrown into adulthood when she volunteered as a nurse during the First World War.

“I would wash all the blood,” Agatha wrote about cleaning up after amputations, “and stick [the limb] in the furnace myself.” Working as an assistant-pharmacist in the war hospital, she developed a life-long fascination with poison. It became the murder weapon in her very first detective novel, which Agatha wrote on a dare from her sister. The ‘Duchess of Death’ was born.

The first of 78 crime novels, ‘The Mysterious Affair at Styles’ already contained all the Agatha Christie trademarks: a picturesque setting, a mysterious murder, feisty female characters and a quirky but brilliant detective (Belgian sleuth Hercule Poirot, in this case). Being as much ‘whydunnits’ as ‘whodunnits’, Agatha’s stories focused on the motive rather than the murder itself. And what motive could be more lethal than love?

Agatha’s first husband was the dashing Archie Christie, a penniless aviator who rode a motorcycle and was a great dancer. Agatha, a very physical person herself, was smitten. Leaving their daughter Rosalind in England, they travelled the world, incidentally becoming the first British surfers to ride a surfboard standing up. Then, in 1926, Archie fell in love with their mutual friend Nancy Neele, right after Agatha’s mother died. One night, Agatha got in her car and drove away. When the police found her, 11 days later in a hotel in Harrogate, she claimed to suffer from amnesia. However, Agatha had been conscious enough to check in under Nancy’s name, putting onto every front page the very name her husband was desperately trying to keep out the press and the divorce courts. A plot twist only Agatha could have made up.

This ‘Gone Girl’-like disappearance marked a complete turnaround for Agatha. Up to that point in her life she had been like ‘a dog, waiting for its master to go for a walk’. But in 1927, she started really owning her life and her skills. Writing helped her define her sense of self and gave her the financial freedom to conquer the world. It became a feminist act. Agatha took off on a solo trip to the Middle East, riding the iconic Orient Express. There, she met archaeologist Max Mallowan who soon proposed to her. Agatha was 39, Max 14 years younger. “I married an archaeologist because the older I grow, the more he appreciates me,” Agatha liked to joke, but theirs was a marriage of equals which allowed both partners to blossom. Agatha helped Max during digs in Iraq and Syria, cleaning the relics – with her face cream! – and photographing them. Meanwhile, she wrote detective classics like ‘Murder on the Orient Express’ and ‘Death on the Nile’. Agatha had accomplished an amazing feat, still so rarely available to women: she had merged her personal ideal of happiness with the world’s idea of success.

Agatha never stopped writing. She died in 1976, at 85. “People should be interested in books, not their authors,” camera-shy Agatha used to say. And: “Never tell all you know—not even to the person you know best.” Still, the Mystery Girl had given herself away in her many novels. Agatha’s feminism, her egalitarian world view, yes even her love of reckless driving; it’s all there in her gutsy female characters, from brilliant daredevil Tuppence Beresford to the elderly but razor-sharp miss Marple. More than that, it is Agatha’s unbridled lust for life that still springs forth from every page she ever wrote. “I like living,” she once said. “I have sometimes been wildly, despairingly, acutely miserable, racked with sorrow; but through it all I still know quite certainly that just to be alive is a grand thing.”